Frank Yiannas, past vice-president of Walmart has called Blockchain technology ‘the holy grail’. But I seek to investigate it. Is it as good as it seems?

Blockchain is beyond bitcoin. Simply put- it is a digital ledger that holds a permanent record of all transactions in the form of blocks linked to each other to form a chain. This is secured with cryptography, making it highly resistant to modifications, thus creating trust. Some companies like Walmart, Dole, and Nestlé have already employed Blockchain in their supply chain operations.

It is being promoted as the all-embracing solution, providing transparency and trust. Moreover, blockchain is a potential solution to multiple food safety issues. Blockchain holds the ability to definitively identify the source of contamination during outbreaks. Further, it is also promising when dealing with food fraud. Foods like olive oil, fish, milk, honey, spices, organic produce and so on are often diluted or adulterated. Blockchain could offer a means to identify provenance. Well even I, as a consumer, would feel more comfortable paying for food which hasn’t been compromised in any way. Recently, the FDA announced that they run pilots for new technologies, including blockchain to help trace pharmaceuticals.

Well, is it good enough?

Blockchain definitely improves the efficiency of traceability. Yiannas compared the time it takes to trace a package of sliced mangoes with and without blockchain. It took them over 18 hours to trace it back to the source. On the other hand, with blockchain enabled technology, they took just over 2 seconds. Oof. That’s some speed, eh? 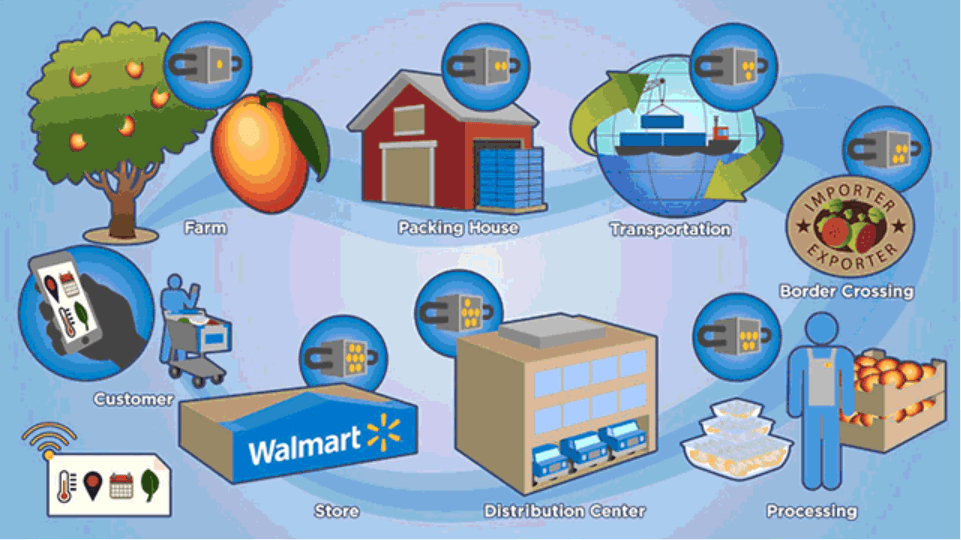 Nonetheless, Mitchell Weinberg, the founder of Inscatech- a food fraud detection and prevention firm is not impressed.

He thinks it is unrealistic and challenges the ability to trace every plant that a particular herb came from. Yiannas adds that this could be done with an added layer of complexity and investigating the source of ingredients from the industry itself.

The major inhibitions to the use of blockchain in the food industry are to the extent to which there is participation, and more importantly, how honest this participation is.

Or as Weinberg puts it, “[blockchain] is only as good as the person who’s entering the information.”

The strength of blockchain lies in its encrypted, decentralized nature. It might be difficult to incorporate blockchain in all sectors of the industry. For example, it might be easier to tag the cows in New Jersey and monitor them, and entering their data on blockchain. However, quite challenging to include it in some parts of India, the largest exporter of beef! It is very important that our farmers and food producers understand enough of this technology to be able to contribute proactively- something which needs a lot of investment, both time and money.

Sarah Taber, a crop scientist based in Fayetteville, North Carolina says that there’s nothing ‘extra’ that blockchain offers at this point of time that pre-existing softwares don’t. She argues that it is not the tool that’s the problem, rather the people and no tool can remove this human element. Agriculture needs more than blockchain.

While this is pretty impressive in concept, I would like to reiterate here that this exercise proves the efficient traceability. And food safety is beyond traceability. Blockchain lights up the entire food system- from farm to fork. This information could be used to create preventive measures to reduce hazards.

It is the future, just not the present yet. We need to do a bit of tweaking and a lot of research in putting together a technology that is ‘accessible’ to all parties in the industry. If this accessibility is skewed, this will again create a niche market, providing this technology and enhanced food safety to the entitled. Food safety is a shared responsibility, and the role of human of the supply chain is far more volatile than blocks of data!

I am super excited to see what the future holds.