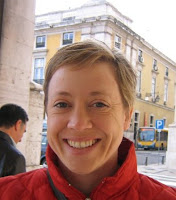 Chef Sarah Wong defies stereotyping. In some funny ways, we share some commonalities. When I first read the names of the faculty, I thought that one of the chefs of the Seattle Culinary Academy was going to be an Asian woman. Nope. Chef Sarah is about my height and has short blonde hair. I guess my surprise at her name shouldn’t be so distinctive – I mean, “Schaub” doesn’t imply shoulder-length black hair and almond-shaped eyes, does it? Anyway, initial amusement aside, Chef Sarah Wong enjoys a rich culinary history, excellent culinary credentials, and a burgeoning passion for meat fabrication.
Chef Sarah was raised in Hawaii, and her dad prepared most of their meals and where she spent her college summers working in her uncle’s restaurant. She came to Seattle to study metalsmith and jewlry arts, and she also earned her Master’s of Education.
While in Seattle she worked at Cafe Flora, a well-known vegetarian restaurant, and there she developed an understanding for sustainability, seasonality, and carbon footprint.

She explained, “Cafe Flora was by far the restaurant that opened my eyes and won my heart.” From working at Cafe Flora, she developed a real sense of respect for the food and for utilizing every part of the food – whether that was a plant or an animal. The experience as the sous chef at Cafe Flora prompted her to pursue a career as a culinary professional. She originally moved back to Hawaii to save money for culinary school but went to Las Vegas and worked as a personal chef for four years instead. Finally, her path moved her back to the Northwest and eventually Seattle.

Using her education background and culinary experiences, Chef Sarah is responsible for various classes at SCA, including Dining Room Service, Cost Control & Purchasing, Introduction to Wine, Functions of Management, and Advanced Culinary Practices, according to the SCA website. 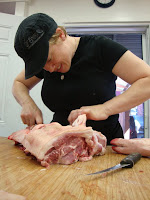 In addition to teaching, she has begun specializing in European seam style butchery. She described it as being focused on “fabricating cuts to their lowest common denominator while saving as much as you can.(Primal–> Subprimal –>Small Muscle)  By maintaining sinew and silverskin you reduce the risk of spoilage and waste (and improve your food cost too).”
Knowing that she had worked in a vegetarian restaurant, I was so curious as to her transition to seam butchery. She said that she wasn’t a vegetarian when she worked there, but vegetarianism reinforced the necessity of respecting the meat she did eat. That’s why seam style butchery makes sense to her. The process uses more meat effectively, and it reduces the waste incurred when cutting meats to certain shapes, discarding the unused scraps. 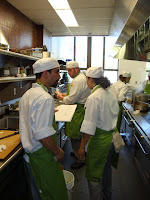 In November, Chef Sarah will be heading to Kate Hill’s Camont farm in Gascony, France. Kate Hill is a recognized culinary expert in Gascon and French food, and she hosts cooking schools throughout the year to give participants hands-on knowledge about traditional French cooking. The particular course Chef Sarah is taking provides an in-depth study of French butchery. She’ll be there for two weeks, and I’m so envious. I can’t wait to hear about the things she will learn!

Chef Sarah is an energetic chef instructor whose passion in education and food draws students into the culinary world.